METHOD acting for directors * online forum Realism * amazon.com * T-blog * Method Acting index * 200X * Film Dir * Books * Theatre w/Anatoly * SHOWs * Script Analysis * Acting * Directing * Russian-American Theatre (RAT) * Film Links * My Russian Plays * BioMechanics * Classes Dir * VIRTUAL THEATRE * appendix * links * list * Glossary * Anatoly's Blog * Stanislavsky: WHAT IS MY SYSTEM?
My system is the result of lifelong searchings. . . . I have groped after a method of work for actors which will enable them to create the image of a character, breathe into it the life of a human spirit and, by natural means, embody it on the stage in a beautiful, artistic form. . . . The foundations for this method were my studies of the nature of an actor.

The first [proposition] is this: There are no formulas . . . on how to become a great actor, or how to play this or that part. [It] is made up of steps towards the true creative state of an actor on the stage. When it is true it is the . . . normal state of a person in real life. But to achieve that normal living state . . . an actor . . . has to be: (a) physically free, in control of free muscles; (b) his attention must be infinitely alert; (c) he must be able to listen and observe on the stage as he would in real life, that is to say be in contact with the person playing opposite him; (d) he must believe in everything that is happening on the stage that is related to the play.

The union of these two actions results in organic action on the stage.

That action then is determined by the subject of the play, its idea, the character of a certain part and the circumstances set up by the playwright.

In order to make it easier for you as an actor to take action on the stage, put yourself first of all in the circumstances proposed by the playwright for the character you are playing. Ask yourself: what would I do if the same thing should happen to me as it does in the play to the character I am playing? . . . Find out all the reasons which justify the actions of your character and then act without reflecting about just where your "own" actions end and "his" begin.

The third proposition (is): True organic action . . . is bound to give rise to sincere feelings.

Therefore the summing up is: On the stage a true inner creative state, action and feeling result in natural life on the stage in the form of one of the characters.

It is by this means that you will come closest to what we call "metamorphosis," always providing of course that you have properly understood the play, its idea, its subject and plot, and have shaped inside yourself the character of one of the dramatis personae.

The system is not a hand-me-down suit you can put on and walk off in. . . . It is a whole way of life; you have to educate yourself in it. . . . You cannot hope to do this all at once.

With strong desire, if you work, if you come to know your own nature, and discipline it, then with talent you will become a true artist. With the gradual study of the method . . . you will find it is not as complicated in execution as it may appear to be in theory. My system is for all nations. All peoples possess the same human nature: it manifests itself in varying ways, but my system is no deterrent to that. --An Actor Prepares
--Building a Character
-- Stanislavski's Legacy

... Method acting: acting style in which the actors try to feel the emotions of the character, pioneered by Konstantin Stanislavsky, currently taught at The Actor's Studio. Of note, most American Method acting was based on an early experiment of Stanislavsky's. Most modern teachers of it have moved forward from the original Stanislavsky method.

First, I have to tell you why you shouldn't read the book. Seriously, how many books do we need on Method Acting? Who doesn't know about Stanislavsky? What new possibly could be written about it? The number of bad book on the subject is the best indicator that everything what could be said is said already.

All right, acting for directors. Spin.

I didn't mean to do it. This book (and others) is an accident.

I kept writing notes for my classes -- and the way to keep doing it was to give them the old fashion structure -- book...

About the title "Method for Directors." If directors could benifit from reading the book, great, but I wrote it for "directors-in-actors" (the entire aim is to help actors to divelop mini-directors in them).

If you haven't read all my directories, I don't know how much we can do with the most complex tool you got -- the actor. You see, you must know more about acting, than actors -- you have to direct them. If you didn't master script analysis, how can you help them? If we still have to talk about mise-en-scene (Stagematrix), now it's too late: you have to position them on stage and find the way ythey understand you and feel right... And the designers... costumes, lights, prop....

Listen, your actors cannot think about all that jazz, they have to stay focused on their roles and characters. They have to served by everybody -- and you are in middle! And guess what? Your actors are the prime responsibility until show is opened! Nothing,l absolutly nothing can save the show, if you got lousy acting. You have to get out of them more than they get without you! This is why they need you. And trust me -- they do.

Maybe in antiquity the spectacle wasn't that important, but nowadays actors are the heart of this very complex machine -- the shows. Please, remember, if they won't hold the public like a partner in tango -- the show is doomed....

I hope that my SHOWS directory finally will come in handy: I tried to keep my notes on the recent shows in order for those directories to serve as a showcases (mostly for directors). Hamlet, 3 Sisters, 12th Night, Dangerous Liaisons -- and now "Don Juan" 2003. The pages are broken down, according to what must matter for a director... Each main character has his/her own pages with my notes to help actors to get the sense of my "directions" (interpretation of the play and each individual role).

I try not to touch the topics well covered in the existing books on Method. Relaxation, Sense Memory, Concentration, Magic If, Objects Substitution, Animal Exercise, Private Moment, Speaking Out, Moment-to-Moment Justification, Affective Memory, Givens, Strasberg, Stanislavsky.... Read other books first. I based this book on my Advanced Acting classes. Do you know what is "emotional recall"? Objective? Obstacle?

The definitions you can find in Dictionary

My task is to show the System (the original name by Stanislavsky) of the Method -- and I do it from the director's perspective. 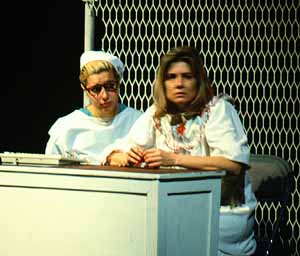 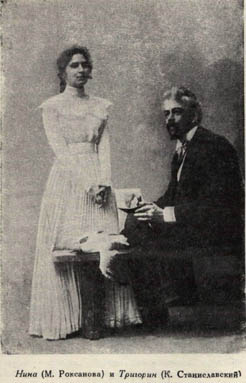 Relax, save it for the bar after the show. They came to see Hamlet, not you. Nobody cares about you and if you are doing good job, nobody even see you! Why are you so nervous? It's him, Hamlet on stage, not you. You are not less invisible than your director. We all are backstage, friend. We are the pupperteers, only in your case the pupper is your body.

Always read the whole book first -- and only then we can come back to each chapter.

Stanislavsky never visits me when the other people are around. I understand it. He doesn't mind, if I am in a company of Aristotle or Shakespeare, but if there are too many of them, the living dead, he doesn't speak. Actors are shy, you know. This is why they act. Sometimes I see him next to my car, waiting for me in this bloody Alaskan winter. But what does he care? Always dressed like for the Oscar! I likew it, especially the silk white scarf. So, we talk in the car. I complain, he complains, but I have to remind him that his complains means nothing; he and everybody he complains about are dead. If I am with Chechov, he never shows up. There is some bad blood between them. He is a gentleman, I am not. I say things, like -- fuck the bullshit, get to the point! He never speaks this way. Never unfinished sentences. Too flowery for me. Well, we all have our short commings. Of course, we speak in Russian. Sometimes my actors ask, what do you say, Anatoly? "It's not for you," I say. How can I tell them that I am talking with Stanislavsky? I am already have a reputation of "the crazy Russian" -- I have to think about my reputation too. Sometimes I have to rude with him, I am sorry, I have to say things like -- Go away! Not now! I will talk to you later! He understands, he is a gentleman.

2005 * After so many years of webbing I cannot change the nature of my webpages -- they are what they were from the start; notes, thoughts, points I make for myself for classes and productions. Do they have an independent existence? Maybe, somewhere in the future...

Let me repeat myself (from Film600 and script.vtheatre.net):

Where teaching and studying (research) meet --

Theme-thought, according to different playwrights (Shakespeare, Ibsen, Strindberg, Chekhov and so on) and directors (Fillini, Kurosawa, Tarkovsky, Bergman pages).

Connections with other themes (list): family, gender and sex...

Finally, my own practical investigations: shows.vtheatre.net (only recently I began to make themes pages, Don Juan 2003, for example).

And the nonfiction (writing), of course: HIM, Father-Russia, PostAmeriKa, Self, POV, Tech (gatepages are in WRITE directory).

Yeah, yeah, there is more -- "philo" pages, metaphysics: in theatre theory directory, for instance (topics-bar: space, time and etc.)
Plus, Virtual Theatre and Book of Spectator!

Web? Oh, this is just medium. Like stage, screen, writing...

@2002-2004 vtheatre.net * Get Site Info "To go into acting is like asking for admission to an insane asylum. Anyone may apply, but only the certifiably insane are admitted." -- Michael Shurtleff, "Audition"
* home * about * guide * classes * advertise * faq * contact * new * forums * mailing list * bookstore * ebooks * calendar * submit your link * search * bookmark *

* All scripts and texts on this site are intended for educational purposes only * my notebook THEATRE 2008 * groups.myspace.com/stagematrix
new: Method + Biomechanics @ act.vtheatre.net
yourdictionary.com & MY glossary portal 07